The small miracle of best buddies 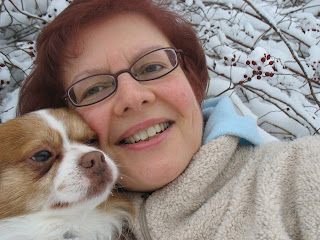 UPDATE: Thanks to 2 heart medications and a diuretic, Cinnamon is stable at the moment, with his stamina slowly increasing. We are thankful!

There had been two dogs in my life as a kid. Fritzie was a brown and black dachshund, and I was about five when we had him. I remember him more by reputation than actual memories. A photograph of my parents and I on the front porch, dressed for church, shows Fritzie jumping in front of us. Apparently, he used to walk to the stop sign at the end of the street and wait for my Dad to come home from work. Neighbourhood kids loved him. One day he went exploring and found some poisoned meat. The next day, he was vomiting, and the next, he died.

The gift Fritzie gave me was a love for dogs. I nagged and begged for years, and the day after my older sister married, I got Caesar, a black poodle. He walked with me through my teenage years, and licked my salty tears as I poured my heart out to him over one boyfriend or another. I’m sure he thought my face was a salt lick. I was a weepy teenager.

After I was married, Caesar stayed with my parents, as we lived in a “no pets” apartment. In the first year of our marriage, he died.

When we moved into a house, I started a daycare, and a dog wasn’t good for business. The gift given to me by Fritzie all those years ago remained. I wanted a dog. Fifteen years, a career change, and the desire resurfaced. My husband wasn’t a dog lover, and money was tight, so for years, I waited. Then I prayed. One day, God sent me Cinnamon.

He is a white and cinnamon coloured peek-a-pom (Pekinese/Pomeranian mix.) His cute little face and curly tail won my heart the first day we met. Over the years, I have been stopped on walks by people who say, “You’re so cute!” I preen and give them a brilliant smile, but they are talking about my dog.

Cinnamon was owned by a doctor’s family with teenaged children. I’ve often wondered what they were thinking when they bought him. Did they not realize that children, like puppies, grow up? When their children went to university, they put Cinnamon outside, hoping he would run away. Confused and frightened, he huddled by the house. Another family took him in, but couldn’t afford to keep him. They fed him table scraps laced with curry, which wrought havoc on his digestive system.   At this time, he entered Diane’s radar. Diane’s hobby was saving pets just like Cinnamon, and placing them in loving homes. Like a marriage made in heaven, this abused three year old dog that nobody wanted came to our home, and into the arms of someone who had waited for him for years.

It took some time for his bowels to recover, and even longer for his spirit to relax. The day came, though, when he was our dog, and he has remained to this day. As the other members of the family left through death, or marriage or further schooling, Cinnamon was always at the door with a cheerful greeting when I came home. At night, he cuddled with me. We took long walks together, and he, too, licked the tears off my face.

Now, my little buddy is tired, as his heart struggles. We are trying medication to see if we can stabilize him. Maybe there are a few more happy years. Or maybe not.

That’s how it is with small miracles, and all God’s gifts.  The sameness of daily routine makes us forget that there is no sameness. Nothing is forever. Today, I gather my little buddy in my arms, and take him up the stairs that are too difficult for him to climb. I nuzzle his face, and tenderly rub his ears. Today, I am thankful. 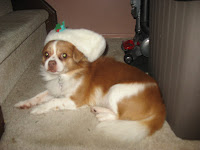 Have you been blessed with an animal that has been a small miracle in your life? 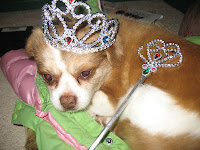 Posted by Ann Peachman Stewart at 21:12