The small miracle of giving 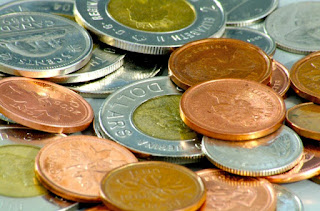 A dollar a day. The concept fascinated me. Could I change the world with a dollar a day?
When our church challenged us to put this amount aside for missions, I was thankful that at this season of my life, I could do this. I am a concrete and visual learner, so I bought a glass container for my dining room table. I needed to watch the coins drop, and hear the muffled tinkle as they bumped.  I needed to see them climb the side.  It became a game, as my larger coins went in the jar. I paid with bills, and gleefully hoarded change until I got home and was able to add it to my stash.
Our church held a benefit concert to bring hope to children and young people. Three specific charities were selected, and and I decided to support the organization giving AIDS orphans a chance for an education. The concept that I could touch and improve the life these children infused me with wonder. The next day, however, I began to think about one of the other causes, which involved digging wells to provide fresh water in a third world country. People were getting sick and dying from diseases we don’t hear about in North America, because they had contaminated water. Troubled, I wandered around the house. “The water, Lord. What can I do about the water?” I had already spent my designated amount, but the conviction wouldn’t leave me. Then the jar caught my eye. It was only about one third full, and I hadn’t planned on emptying it yet, but…The coins made a satisfying clamour as they spilled. One third of a jar of coins can still amount to a significant amount of money! I was able to contribute to this cause, also.
Then came the night I had company for dinner, and someone joked, “Is this for tips?” I hesitated. Should I explain? The person asking had no church background. Plunging ahead, I replied, “No, that’s for world hunger, clean water and AIDS orphans.” That led to a discussion of the Christian’s response to world need which wouldn’t have occurred without the jar of coins on the table.
My granddaughter, who was three at the time, noticed the “moneys.” “Did you know there are children who are hungry? Grandma’s saving money in the jar so we can buy them food.” She may not understand money, but she knows children and hunger. I grabbed my wallet and she enjoyed adding coins to my collection. I was thrilled to introduce her to the concept of giving. Every time she comes, she puts “moneys” in the jar for poor children.
Then I understood. I had set out to change the world, but giving was changing my world—and me.
Amazing dividends for a dollar a day.

Posted by Ann Peachman Stewart at 22:22