The small miracle of stuff 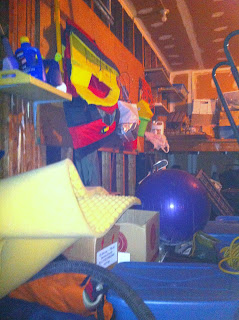 We all have stuff. Nothing wrong with that.
The problem comes when our stuff has us.

The Parable of the Stuff

There once was an elderly lady. She had lived lots of years, and now she wheezed when she walked and puffed when she got up and squinted when she tried to see. For all the years she'd lived, you'd think she would be wise, and in many ways she was. But she had one problem.

She loved her stuff.

She wasn't rich, and truthfully, some of her stuff was in tatters. But it was hers, and she got anxious whenever she couldn't find it. Some of her family took some of it away, because her room was crowded, and they were afraid she would fall over it. She became upset and thought they had stolen it, and she demanded they bring it back. In fact, whenever she misplaced anything, she immediately assumed it was stolen. She had her stuff in boxes and cartons and bins and in a container under the bed. She never went out, and  never had fun, but her stuff was safe. She had her stuff. Or it had her.

That's an extreme example, but keeping a balance in this area is a continual challenge. We want stuff, and then we want better stuff. When it get it, it needs to be washed and ironed and cut and fertilized and cleaned and maintained and polished and vacuumed. Our stuff takes a lot of work.

There was a man in the Bible who cornered the market on stuff.

"Speaking to the people He went on. 'Protect yourself against the least bit of greed. Life is not defined by what you have, even when you have a lot.' Then He told them this story. 'The farm of a certain rich man produced a terrific crop. He talked to himself. 'What can I do? My barn isn't big enough for this harvest.' Then he said, 'Here's what I'll do. I'll tear down my barns and build bigger ones. Then I'll gather in all my grains and goods, and I'll say to myself, Self, you've done well. You've got it made and can now retire. Take it easy and have the time of your life.' Just then, God showed up and said, 'Fool! Tonight you die. And your barnful of goods--who gets it?'  That's what happens when you fill your barn with Self and not with God." Luke 12:13-21 (The Message)

The key to the whole "stuff" thing is attitude. God doesn't say not to save for retirement, or that you can't own and enjoy things. The reason why this farmer got called to task was his attitude. He was focusing on looking after his stuff, rather than sharing it. He wasn't looking to help the poor with his bumper crop, he was building bigger barns.

HOLD YOUR STUFF WITH AN OPEN HAND.

It was probably 40 years ago that I had the privilege of hearing Corrie Ten Boom speak in person. Her words imprinted on my soul and molded my life. She said, "Hold everything in your hands, lightly. Otherwise, it hurts when God pries your fingers open." As someone who had everything taken away by the Nazis when her family hid Jews during the war, she learned this lesson.

So, I was wondering--what's in your barn?


Is God prying open your fingers in some area of your life?


Posted by Ann Peachman Stewart at 19:06