The small miracle of small steps 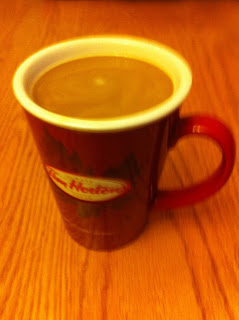 Not that I'm a bad neighbour. I'm a quiet neighbour. I live my life side-by-side with people in my townhouse complex and smile shyly at them as we put out our mutual garbage. We all hibernate in the winter, emerging in the frozen night to go to work. and slinking back under cover of dark at the end of the day.A snowfall will bring us from our lairs briefly, where we puff and complain about the weather, as we fling snow with abandon. We grunt words like, "Tough." "Canadian, eh." and "This was nothing, you should have seen..." and creep to our cozy homes when the task is complete.

In the spring as the buds emerge and the grass greens, I spend more time outdoors and begin to greet my neighbours with shy smiles again. We rush past each other with a few friendly words.

I don't  know their names.

Last spring, as Hunter walked the lake for exercise after his heart surgery, he talked to people. It's who he is, and I was amazed. When we walked together, he gave me the condensed version of what he had learned. "That's Sally. She has three kids. The oldest is in university, and she's worried about him. Her husband works for Hydro and she's a nurse." I gaped at Sally as she jogged by with a friendly wave. I'd seen her before and didn't know a blessed thing about her--not even her name. Although I don't have Hunter's outgoing personality, I realized I wanted to learn to connect with my neighbours in a way that worked for me.

"Lord, is there a way a shy-but-essentially-friendly woman can reach out to her neighbours?"

I heard of a couple in the U.S. who offered coffee and baking to the adults on Halloween. Interesting.

I decided to try it.

That's when everything went wrong.

After a crazy-busy day at work, I got away a few minutes late.The nature of my long commute is that, if one factor (like a missed bus) occurs, the whole thing dominoes out of control. I got home 30 minutes late, it was already dark, and little people in costumes were on my doorstep. I almost gave up, but an unexpected lull in the crowd gave me the opportunity to get my curbside cafe together. Then this shy-but-essentially-friendly woman stood hollering at the parents who were shivering at the curb, "I've got COFFEE!"

Through the sodden leaves and the raindrops they wrapped both hands around styrofoam mugs and smiled. "Forget the candy. This is definitely the best house." declared one dad.

Today, I am thankful for neighbours, my community, and the small miracle of small steps in connecting with them.

"Each of us should please our neighbours for their good, to build them up." Rom. 15:2

Posted by Ann Peachman Stewart at 14:55