The small miracle of camping 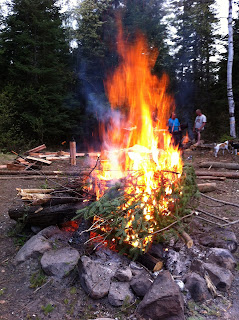 I just returned from my first camping trip in 40 years.
And I loved it.

Although this was a camping experience like I'd never had in my life, it was what I always thought camping should be. Pitching your tent in a square of land in a provincial park beside other squares of land with other people, never felt like camping to me. I live in a townhouse on a square of land beside other townhouses on similar squares of land. I want camping to be different.

We had to rent a 4x4 for the weekend to get into the place we were going. The paved road became a dirt road, and then turned into something that wasn't a road, but we drove over it anyway. Boulders protruded from the centre and had to be driven around. A beaver dam pretty much crossed the road at one point. The brush on either side reached out to grab your vehicle. Eventually, we emerged into a clearing where the rest of the family was set up already. At the end of the road, a lake beckoned, and we set up out tent close to the shore. A huge communal griddle cooked all the food, and a spit run by a generator held a huge turkey.  Tents, trailers, campers and various places to sleep snuggled on either side of the trail, and a huge fir pit was the centre of attraction. It was camper heaven.

We all learned things this weekend.

Bailey learned that you can harass and harass other dogs (at least two of whom were far bigger than him) but eventually they will have had enough. On Monday morning, we let him out to pee, and fell back asleep. We woke to the sound of howling, and he returned shaking and subdued. Later we noticed bite marks on his ear and mouth, and he was drooling and unable to eat for half a day. I'm sorry he had to get hurt, but he is a different dog now. Quieter. He listens. I hope it lasts.

Hunter learned that his wife is a good camper.

I learned (and relearned) lots of things.

1) I learned that putting up a tent is a lot easier than it used to be. I'm pretty sure I could do that on my own, now.

2) I relearned the fine art of peeing in the bush. (It is an art, believe me)

3) I learned a water bottle with the lid on explodes when put in the fire. Cool.

4) I learned turkey cooked for hours over the spit is the most amazing food I have ever eaten.  Ditto for deer meat cooked on the communal griddle.

5) I've always loved campfires, but I learned that bigger is better and huge is best. I LOVE watching the flames climb higher and and sparks reach to the sky.

6) I learned that what looked like massive amounts of food--dozens of eggs, pounds of bacon, ham, sausage and mounds of pancakes, would all disappear in minutes.

7) I learned that sleeping on the ground without an air mattress is a whole lot more difficult than with one. (Hunter forgot the pump for the air mattress, but someone lent us one the second night. Ahhhhhh.)

8) I learned that before we do this the next time, I am buying a bug hat. You know, one of those ugly things with the netting coming down from the hat?

9) I learned that the only times the black flies weren't terrible were a) when it was raining, but then it was, you know...raining. or b) at night, but then it was dark and cold. The rest of the time, they were relentless.

10) I learned it is very cosy to snuggle in a tent together.

Low moment in the trip:
When one of Hunter's sons, on the second day, asked me my name. We had met before. We've been married a year. Geeze!

High moment in the trip:
When the same son and another son both made points of telling me how much they liked the pies I made. "You know, the way to our hearts IS through our stomachs." Grin. Yeah, I know.

Simple pleasure on the trip:
I sat for two hours and read a book. Can't remember the last time that happened.

Moment of joy on the trip:
The moment I realised that not only could I do this, but I was having a blast. The moment Hunter realised it, and was proud of me. The moment he told me.

I AM CAMPERWOMAN. HEAR ME SWAT!


Posted by Ann Peachman Stewart at 10:24