Caregiver Wednesdays- Finding the Trigger on the Smoking Gun 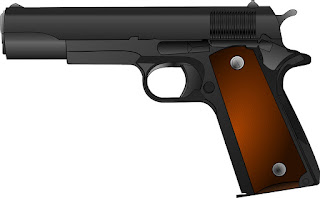 I don't know much about guns. I shot one once, at a target. I missed.

I know a gun has a trigger, and in order to shoot it, you have to pull the trigger. (Duh!) I learned that first from Road Runner cartoons. Wile E. Coyote would shoot his gun and then stand casually blowing the smoke away. That was usually when a stone or heavy weight fell on him. But I digress…

In dementia, anger and aggression can be caused by many sources, or "triggers." If you can discover the source of the agitation, it might be possible to intervene and remove it.  This isn't only true for anger, but works with many behaviours.

What could be possible triggers?

Is the person ill? A low-grade fever or a urinary tract infection or even a slight cold may not have shown itself in symptoms, but you know how it can make you feel. If you are feeling ill, you have less patience. How much more the person with dementia?

How are they sleeping? Sleep disturbances are common, and someone whose sleep has been interrupted is going to be more prone to anger the next day. Related to this are their medications, some of which might cause drowsiness.

Are they hydrated? This seems simple, but many seniors don't drink enough, and dehydration can cause all kinds of problems in frail elderly.

Beyond this, you need to become a detective. What happened immediately before? Is there something going on in the family that is making them sad or anxious?

Is the person frustrated or embarrassed because they know they aren't able to cope, can't remember or live in a state of confusion?

Is there too much stimulation? Too much noise, too many people talking, too much information to try to process?

Are they frightened or threatened by something real or perceived in their environment?

Here are some examples:

Laura's daughter just left on vacation. She is far enough away that there will be no communication for ten days. Laura doesn't understand why she feels anxious and angry. There are times when she forgets her daughter is away. But she lashes out much more frequently than is normal for her.

George hates to be touched unless he initiates it. If someone "helps" him to walk, or guides his walker away from danger, he becomes furious.

Florence knows that she can't remember how to cook. She used to love to create meals for her family, and not being able to brings her anxiety and huge embarrassment. She feels that she is failing in her calling. It makes her angry.

Roger loves family gatherings, but after a few minutes, he becomes impatient, and sometimes yells. The noise of everyone talking and the faces he knows he should recognise cause him embarrassment which leads to anger.

Every trigger is a fantastic discovery. If you can find the "why" behind the explosion, you can sometimes prevent it.

Next week: Tackling the triggers.


Posted by Ann Peachman Stewart at 19:24