Caregiver Wednesday- The Buzz about Drugs 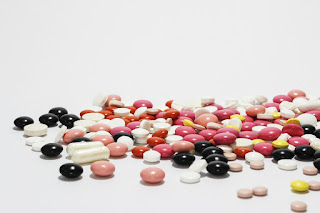 If you live in the Greater Toronto Area, it's all the buzz.

What are the issues?

These drugs were developed to treat severe mental disorders, and are effective for them. They were never meant to treat the elderly, especially those with dementia. "When antipsychotics are prescribed to seniors with dementia, it's known as an "off-label" use meaning a drug is being used for a condition or age group for which it hasn't been approved. It's legal for doctors to do this, and they do so with little oversight."1

Drugs are being prescribed for uses and a population for which it isn't approved? Why?

Is it because they are effective?

No, the opposite is true. Dr. G. Allen Power, in Dementia Beyond Drugs (my book of choice at the moment) says, (referring to studies that have been done on the use of these medications on people with dementia) "even if we take these studies at face value, fewer than one in five people will improve due to the medication. How many doctors would give a patient an antibiotic that has less than a 20% chance of working, or a heart medication that helps fewer than one in 5 patients?" 2

The other issue is how you measure "effective." If a person with dementia is wandering, getting into other people's space and requiring monitoring, this is a problem. If you treat the problem by giving them an antipsychotic and the wandering stops, do you call it "effective?" What if what is happening is the person is sleeping most of the time, and is too drugged to wander? You got the desired result, but is it effective? Is quality of life even a consideration?

This "solution," which isn't a solution, is occurring at alarming rates. The Star article quotes statistics where 50-60% of the residents of certain homes are being treated with these medications.

Some of the side effects are over-sedation, loss of appetite and falling.

Those who work within the present, broken system point to nursing and caregiver shortages. The doctors prescribe because the staff asks for them. If one PSW has 12 people to care for, and even one or two of them are agitated and difficult due to dementia, they need help, and this is the help of choice.

Many are asking, and that which was accepted as normal and reasonable is being questioned. The use of antipsychotic drugs with seniors with dementia, except in the most severe of cases, is not right.

What are the alternatives?

Culture change. Rather than pumping billions of dollars into pharmaceuticals, we need to invest in staffing, and in training in alternative methods of dealing with behaviours. Sometimes a "behaviour" isn't that at all, but a reasonable response of a person with a certain background.

In his book, Power describes a woman who was restless in the evening, and kept getting out of bed after she's been settled for the night. Rather than giving her a sleeping pill, they talked to the family, and discovered that she was a dancer, and seldom went to bed before 4:00 a.m. throughout her adult life. They settled her in an easy chair with a television, in an open area where staff could ensure she was safe. She happily watched TV until she was ready to go to sleep at the time that was "normal" for her.

Culture change is expensive. It's time consuming. You have to get to know each person--their history, their passions, and what makes them tick. It's hard.

It's the only way.

Posted by Ann Peachman Stewart at 18:54