The small miracle of words 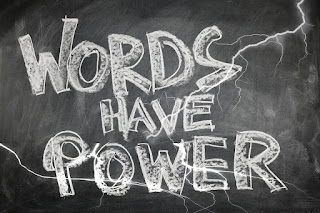 "Gracious words are like a honeycomb, sweetness to the soul and health to the body." Prov. 16:24

"If you can't say something nice, don't say nothin' at all." Thumper

During the sermon this morning, tears sprang to my eyes as a memory surfaced. Tears are a sure indication of something deep within me being stirred. Pastor Doug was talking about the impact of the tongue from the book of Proverbs, and mentioned a teacher who had such influence on him, he remembered those lessons to this day, and still had a small gift she gave him.

In grade three, my teacher felt that intimidation was an effective teaching tool. I was good at many things, and my budding writing skills were emerging, but those weren't areas I remember her focusing on. Basic math wasn't my forte, and I struggled. It was like cotton wool was wrapped over my brain during math class, and I couldn't get the concepts to stick.

One day, she called me to the front of the class. Shy and feeling vulnerable and afraid, I picked up the chalk and stared at the math questions she wanted me to solve. Having my classmates watching (and a few snickering) exacerbated the problem, and even the math I knew flew from my mind. I was paralysed. Miss T. then began to berate me in front of the class, a method she assumed would improve my performance. What it did was make me cry. In disgrace, I crept back to my seat, a wounded animal. I wouldn't recover for many years.

Jump ahead to grade 11. My grades were mediocre at best, but my teacher, a man with incredible insight, saw something in me. When my parents went to the fall teacher's interview, he said to them, "Someone has told her she is stupid. I am going to convince her otherwise." An interesting sideline is, my parents didn't know about what Miss T. had done, so were skeptical of his words. They relayed them to me, and immediately in my mind I was standing in front of the chalk board again. I was awestruck at both his insight and his interest.

I was a brand new Christian and Mr. A. was an atheist. He was my homeroom teacher, and taught me history that year and the next. He challenged me, and I remember long conversations after class where I was stretched, and learned to both voice my opinion (silence had been my secret weapon to that point) and to think deeply and learn to defend what I believed. I developed a passion for history, and wanted to understand the "why" behind events. I discovered, to my astonishment, that I was a person of worth, with a mind that worked, and opinions that mattered.

Four years later, I graduated from Seminary with two degrees, and wrote Mr. A., asking if he would attend my graduation. I wasn't sure if the letter would get to him, or if he would remember me. On the night of graduation, I scanned the crowd, and was delighted to see his quizzical smile. He told me his wife was graduating from university that night, but they talked about it, and she agreed it was important for him to be there for me. I never met his wife, but will always be grateful.

Both these people were teachers, but teachers aren't the only ones with influence. Each of us has the chance to say to someone:
"You matter."
"I believe in you."
"I appreciate you."
"I am thankful for you."

I've not always been good at this, but I think I have improved. I've learned to stop and pray when I am upset, instead of allowing hurt and destructive words to tumble out of my mouth. I'm learning not to judge, and to give the gift of encouragement and affirmation whenever I can.

Sometimes, I fail, and I've learned to say, "Forgive me." This used to be more difficult. Pride would get in the way.

Now, I remember the broken child at the blackboard, and how those words would have changed her life.

"Thoughtless words can wound as deeply as any sword, but wisely spoken words can heal." Prov. 12:18


Posted by Ann Peachman Stewart at 11:33