Care partner Wednesdays--When the "pill" of choice is knitting needles 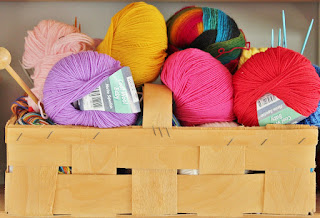 It was not a good day.

An incredibly perceptive person, Ida attended a fitness class she usually loved in the morning. The instructor wasn't feeling well, and left immediately after the class was over, but in her mind, it had something to do with her. Maybe there was some kind of conspiracy, or maybe he was mad at her, but it left her anxious and weepy. She almost skipped lunch, but was persuaded into the dining room. During the meal, she was morose, eating but not socialising with her table mates like normal. After lunch, she felt something was wrong with her grandson, and again became weepy and anxious. As we talked, I realised she looked tired, and suggested a short nap might help. She agreed.

Just as she was leaving the lounge to go to her room, one of my fellow Advocates pulled out the bin of knitting. The group of ladies who spent the afternoon clacking needles and tongues were gathering and the volunteer who assisted them had just arrived. Ida hesitated at the door and then left, presumably for her nap. In a few minutes, she returned with a tangled ball of wool and two needles.

More than wool got untangled that afternoon.

Ida's anxiety, fear and sadness were gone. There are no guarantees it won't return later in the evening, but for those few hours, it left her. The only side effect was a friendship birthed between the two ladies and a tidy ball of wool.

We are constantly looking for non-medical interventions as we pursue culture change. Here is what I have learned.

2) What works well for one person will fail utterly for another.

3) Some ideas are totally predictable, and some surprise the heck out of you.

4) They often take a lot of time and effort.

5) They take "out of the box," creative thinking to devise.

7) The only "side effects" are positive.

7) They are incredibly rewarding for everyone involved.

Anti-psychotic and anti-anxiety medications have their uses in a small group of people--mostly those with pre-existing mental health conditions. If used, they should be in the lowest effective dose, and monitored closely.

Before this type of medication is considered, it's important to look at what else relieves the symptoms. Is it music? Some time in the fresh air? Visits from family?

Or perhaps it's time to pull out the knitting needles...


Posted by Ann Peachman Stewart at 18:32