Care Partner Wednesday--Becoming invisible and how to avoid it. 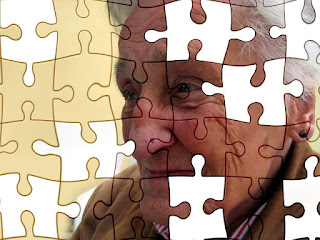 I was sitting in my spot on the couch watching Midsomer Murders on Netflix. This episode involved a suspicious death at a retirement home. The main character's daughter had come to visit an elderly aunt, but had been charmed by another resident--a gentleman who must have been quite the rapscallion in his youth. As she is leaving, they chat, and he turns pensive. "You know what is the worst part of ageing?" he says to her.

He stares into the distance as he answers his own question. "You become invisible."

I wanted to turn off the program, as my interest in the murder had vanished. This man had just been incredibly profound, and I needed to think about it.

Having worked for so many years in an environment where seniors are valued, the comment jarred me. Yet it contained a lot of truth.

What does the world value? The easiest way to answer that question is to look at advertisements. What is being sold and what are we buying?  Looks, position, power. Smart people who are at the cutting edge of whatever new development is happening. Strength, fitness, fame. We value people who are at the top of their game.

Does that describe many elderly people you know?

The people I work with have wrinkles, sagging skin and marks on their faces that can't be erased by any cream bought at the drug store. They are retired, and although many of them still live vital and interesting lives, their contribution isn't something most of society values. For the most part, they wield little power in the traditional sense of the word. They aren't at the cutting edge or the top of anything. Most are frail, and fitness is measured in how much mobility they can maintain. Many of them made huge contributions to art, literature or business. They changed the world, but it was their world. Our world isn't all that interested.

If we let them, they too will become invisible, fading into the pages of history.

It is my job to find out who these amazing, interesting people are. What was their job? Did they do research in children's diseases, or did they raise incredible children? Did they write books, or travel and see awesome sights? Did they fight in wars, or live through indescribable horrors? Did they teach in a one room schoolhouse or learn in one? It is my privilege to ask these questions and find out who they are--not just who they were and what they did, but who those experiences turned them into. It is my privilege, and my responsibility.

In our elderly, we have depths of wisdom that we need. We need to know what they learned from living through a war, a depression, in a world that was difficult and frightening. What did they learn, and what can they teach me? Or you? They experienced all kinds of relationships. They made mistakes and learned from them. They are not perfect, but they are wise. Their wisdom is a commodity we can't let slip away.

What would happen if we did? Imagine if we lived our lives in the moment, chasing after the things that seem important--the fame, the money, the good looks etc. that I've already mentioned. Or maybe we're not that shallow, but we make our way forward with our own lives, and never ask the questions that matter to our elderly. We look after them and we love them, but we let them slip away without ever getting to know them. We don't value what is valuable until it is gone.

We would lose opportunity to be enriched. The depth of experiences, the funny stories, the lives well lived, would be gone. We would have missed the cream and be left with the skim milk of our lives.

We would become invisible.

Posted by Ann Peachman Stewart at 15:52