The Small Miracle of Shining Light in the Darkness 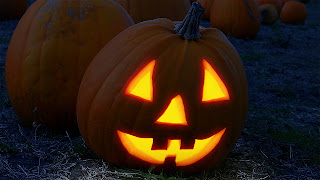 My new favorite poster is a picture of a goldfish wearing a shark costume. It says, "Be brave. Even if you're not, pretend to be." So today, I will pretend to be brave and talk about Hallowe'en.

When my kids were growing up, we did a modified version of Hallowe'en, but they never went trick-or-treating. The first year they were old enough I had a party, but because all their birthdays landed in the fall, I was pretty well partied-out by the end of October. There were a few events at the church that we participated in as a family, and several years we went to Chuck. E. Cheese. They dressed up, they got a few treats and had fun.

My reasons for not allowing trick-or-treating were based on the history of Hallowe'en, it's evil roots, and the fact that I didn't want them to have that much candy. Theology and practical mothering combined. I wanted to protect my children from evil, and this seemed to be a way to do it. Another part of the truth is that I was fearful of the influence of the celebration on them. Much of my parenting was about fear, and it wasn't healthy.

My intentions were good but other than modifying the flow of candy through our house, they accomplished little. My children weren't blind or unintelligent, and they understood the glorifying of death and murder and gore that so much of the celebration entailed. They understood, and it didn't scar them. Being set apart from the other kids, and missing out on the fun because of our faith--that might have left a scar or two.

The words of Maya Angelou have helped me deal with the guilt of decisions I regret in my parenting: "Do the best you can until you know better. Then when you know better, do better." I know better now, and I'm trying to do better.

Here's where I stand: Halloween originated in pagan festivals in ancient Britain and Ireland. That's historical fact. But I don't live where the pagan festivals are practiced. In 21st century North America, I live in a community where Moms and Dads bring their kids around in costumes and the kids get candy. Everyone laughs and admires what the kids are wearing. Neighbours talk, and community happens.

Four years ago, I decided to try something that, for me, was radical and brave.

When I outgrew trick-or-treating, my mother shut off all the lights in the house and retired to the basement on Hallowe'en. That bothered me. I didn't want to be the person who shut off the lights.  I decided to take my Keurig outside and offer coffee and tea to the adults who shivered down the street. For a shy introvert, it was a radical move. What if people thought I was crazy. Who did that, anyway? But I wanted to be a light, rather than turning off the lights.

The first year, it was a stretch. People looked at me strangely, and only a few took me up on my offer. But those that did left smiling and happy, and that gave me courage for the next year. Four years later, neighbours come looking for my place and their treat. I served 23 cups of coffee, tea, and hot chocolate this year, talked to my next door neighbour, joked with parents and loved the feeling that I was a part of the community. For a tiny investment of money and a few hours of my time, I got spread light and warmth.

It's different at work, too. Years ago, Hallowe'en wasn't acknowledged on the calendar, let alone celebrated at work. Now, we dress up, and the elder's faces light up. We give them hats and other regalia to wear, and they gladly become pirates, clowns, and cats. We take pictures and admire ourselves and generally act goofy. We laugh. A lot. In this community, too, the celebration of Hallowe'en is innocent and fun and a time to enjoy ourselves together.

So, I do Hallowe'en. I'm thankful for the opportunity to shine my light in my world--even if it's inside a pumpkin.

CLICK TO TWEET
The Small Miracle of Shining Light in Darkness
Posted by Ann Peachman Stewart at 16:35