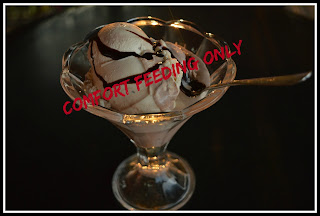 "I want some chocolate ice cream."

My co-worker, Melissa was startled to hear this. Paul was at the end of his life and had lost all interest in food. Although he could still swallow, he hadn't had anything to eat or drink for several days, and staff had been instructed not to offer anything. Melissa wasn't sure what to do.

"I want chocolate ice cream," he said again. Quietly, Melissa went to the kitchen and filled a small bowl. Returning with it, she couldn't keep herself from checking the hallway. Would she get in trouble for this? She stole into the room and handed Paul his ice cream. With shaking hands, he took a spoonful, and then another. The flavour burst in his dry mouth and a smile stole over his face. After two bites, he set the bowl aside. That was enough.

Paul had been an ice cream lover and a chocoholic all his life. In his later years, his diabetes had restricted access to many of his favourite treats. As the ice cream melted on his tongue, whole worlds of pleasure filled him.

There is a sidebar to this story. Paul's daughter found out about the ice cream, and Melissa did get in trouble. She received a tongue-lashing for "unnecessarily prolonging his life." Years later, Melissa was glad she'd gone for ice cream and would make the same decision today.

Comfort Feeding Only is given around the time end-of-life is declared. For the most part, the loved one has lost all interest in food, and may no longer be drinking, except for small sips of water or ice chips. The goal of CFO isn't nutrition or even sustenance, but to provide comfort. A few mouthfuls of warm soup, a taste of chocolate cake, a little of a favourite meal, or ice cream. The purpose of the food is to invoke happy memories and reminiscences or bring the joy and pleasure of a loved flavour. It's to bring comfort and the social aspect of sharing it with another person. It's not to provide sustenance or hydration, and it won't prolong life.

A few weeks before Bill died, he expressed a desire to have lobster. I'd never cooked a lobster in my life and had no idea how to go about it. For him, though, this was reminiscent of a trip he took a few years earlier to the east coast. He'd visited a beloved guitar teacher, taken a ride on his boat and eaten lobster. The memories were wrapped up with the tastes in his mind, and he wanted to revisit it. I remembered a grocery store where I had seen lobster on ice, so I visited and found a sympathetic man in a white apron who gave me detailed instructions. Before leaving the store, I bought all the special picks that Bill would need to get into his treat. Back home, I followed the store clerk's instructions to the letter and presented Bill with the finished product. It took him over an hour, but he finished every bit of that tiny lobster. A few weeks later he died, and I've always looked back on that meal as one of the most important I ever cooked.

Care partners and other family members sometimes find it heartbreaking when someone they love isn't eating. It's hard to watch. It's important to know that they don't desire food for the most part, and aren't experiencing hunger and thirst. This is a natural process for the body to shut down.

Last week we talked about feeding tubes, and why they aren't recommended. What about intravenous fluids?

There are so many reasons not to do this.


Instead of invasive medical treatments that don't prolong life, and may increase discomfort, why not consider a couple of spoonfuls of chocolate ice cream?

Next week--What is a DNR, and should I have one?
Posted by Ann Peachman Stewart at 16:32