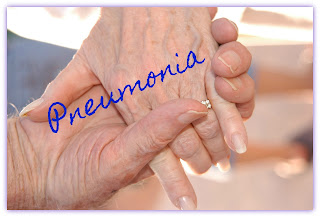 In the morning, Ruby got up with the help of her care partner at the facility where she lived. In the dining room, she ate toast and eggs, drank her prune juice and the imperative cup of coffee. Mid-morning, her son and daughter-in-law came to visit. They took her for a walk in her wheelchair, and she was happy to have the time with them. They left at 11:30. At lunch, Ruby didn't look herself. She was pale and hanging her head, and said she didn't want to eat. Helped back to bed, staff monitored her. By evening, it was obvious she had pneumonia.

How can things change so quickly? How can someone who looks fine in the morning be so sick by evening? This isn't unusual. Frail elderly people often have multiple conditions they are dealing with, and even a small infection can be the tipping point into serious illness. It can happen quickly.

"Sir William Osler, sometimes called the father of modern medicine, famously called it "friend of the aged"(often referred to as "the old man's friend") because it was seen as a swift, relatively painless way to die. But that was over 100 years ago. Today vaccines, antibiotics and improved supportive care mean doctors can do a lot more about pneumonia, although it remains a major killer, capable of thwarting the best efforts at prevention and treatment." 1

Why are elderly people so susceptible to pneumonia, and why is it so dangerous for them?


Surely pneumonia isn't the threat it used to be. We have antibiotics.

Pneumonia is still a serious threat to a frail elder. Because it can spread so quickly, it needs to be caught immediately. Many elders are on multiple medications to control other conditions. Their livers and kidneys are not able to metabolize drugs as well as when they were younger. Adding another, sometimes strong antibiotic to the mix can have serious consequences. Sometimes, the elder is too frail to fight.

There are times when the best decision is not to treat pneumonia.

If all indications are that the body is shutting down, if there are multiple medical problems and each day is a struggle, then this may be a decision a care partner has to make. It's heartbreaking to be in that position.

The time to discuss this isn't when your elder is sick, but months and even years earlier. It's not a one-time discussion, either, but one that needs to be revisited. Because as difficult as it is for a care partner to decide, it's worse if they have no idea what the elder wants and no way of finding out.

Talk about it. Today.

NEXT WEEK: Levels of care and sending to hospital