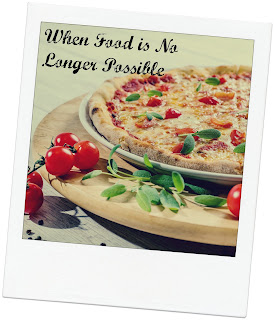 When Bill was dying of heart disease, I didn't know he was dying.
He was palliative and nearing end-of-life, but I didn't understand those terms, and no one explained them to me. Perhaps because he was only 55, every medical person was full of hope until all hope was gone.

One disturbing symptom was when his appetite waned. He always enjoyed his meals, and especially his desserts, and he had a small pot belly to show it. Gradually, what would be a normal serving for him was too much. Half his meal would get thrown out, and eventually, he'd stop after a few bites. "Sorry," he'd say, and I'd reassure him it was fine.

But it wasn't fine. I laid awake nights trying to think of things he would enjoy eating. "If you don't eat, you'll never get stronger," I argued in my head. I cooked small portions of special treats, but nothing helped. The weight fell off him, and in a few months, he looked skeletal.

What I didn't understand was that this was his body's way of shutting down. It didn't need nutrition in the same way because the internal organs such as liver and kidneys were not able to process them effectively. This is the time to look at comfort feeding, something we will discuss next week.

In an elder, there can be a slow decline in the ability to chew and swallow. It may be related to tooth loss, but more often, it's due to inability to swallow effectively. The risk of aspiration pneumonia is high, and each spoonful must be given slowly, waiting to see that the last one has been swallowed. Often, the diet is changed from regular to minced, soft diet or even pureed. Fluids need to be thickened, as elders dealing with this continually choke on thin fluids. Sometimes, high protein supplements are added. Because food that is minced or pureed looks less appetizing, less is consumed.

For care partners, it's a heart-breaking time. Watching someone you love waste away is both frightening and frustrating. Everything inside of you wants to do something to fix the situation. "I can't just let him starve!"

And so, because we live in an age where amazing medical interventions are possible, someone might suggest tube feeding. This is when a tube is surgically inserted into the stomach, and liquid nutrition is given. Tube feeding was developed to be used short-term in people with medical conditions that are treatable. It was never meant for elders at the end of their lives, in a palliative state, with no hope of recovery.


The realization that your loved one can no longer eat or drink is gut-wrenching because it's a clear marker that the end is near. The temptation is to look for miraculous answers. But the truly miraculous answer is to stay close, to hold their hand and to walk with them through this journey to the end.