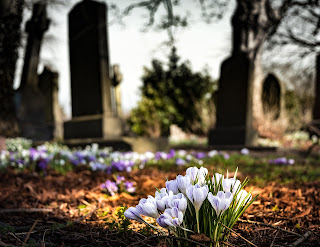 I'm doing death better than I used to.

When people are dying, it's seldom pretty. Hollywood has glamourized it to something it's not. For a newbie (at the time) like me, it was scary and I avoided it. I wasn't in a position where I was supporting families at that time, and I made myself scarce around the dying person's room. Some people like to sit with dying people and hold their hands. That isn't me.

In my first year, a resident passed away and the funeral home was in the room when the nurse called me into the room. Quaking inwardly, I wondered what she could want. I went in to find that the resident had already been put in the body bag, but the nurse realized she was still wearing her rings. The family wanted those rings, so she called me in to witness her taking the rings off and putting them in an envelope. She unzipped the bag, pulled out her lifeless arm and removed the rings. She was a seasoned nurse and this was no big deal. I was shaking. This was my first dead body. A few days earlier I was holding that hand in a music program, and now it was protruding from a body bag. The good news is, my lunch stayed down. Just barely.

Since then, there have been many residents and many deaths. For a long time after that, I avoided going into the room of a dying person, and I kept my phobia to myself. I served on the Palliative Care committee, and no one knew I was terrified by death. It would have been a shameful admission.

Two deaths started to change me. Surprisingly, they occurred fairly close to each other, and I have a close relationship with each of them. The first was my husband. I was in the room when they slowly shut down the machines, one by one, that were keeping him alive. Although the ICU was crowded with our family, a strange silence hovered as the last machine stopped. The medical staff stepped back and allowed us a few minutes. I touched his hand for the last time and said good-bye. Somehow, it wasn't scary. I'd done life with this man for the last 30 years, and now that part of the journey was over. What I felt was peace. His tortured body was at rest and he was with Jesus. The frightened, creepy feelings I usually experienced were totally absent.

Several months later, a resident who I loved like a mother, a mentor and a friend was dying. I stood outside her door and took several deep breaths before entering. She was still conscious, and I knew in my heart this would be our last visit. I sat and stroked her beautiful silver hair on the pillow. We talked of the day we first met in the store, and how we'd shared a hot cross bun recipe. I told her I loved when she laughed and then snorted and then laughed at snorting. I told her I loved her. The time passed, and I knew I needed to leave. "I need to go now, but I'll see you again." Then, because our relationship was always brutally honest, I stroked her hair and whispered, "But if you go first, I'll see you in heaven." She turned her lovely blue eyes to me and whispered, "yes."

Since then, I've slowly realized a few things.

Most of the time, the dying person is well looked after. Our care partners are excellent at keeping them comfortable, and the doctors and nurses ensure pain is kept at bay. There are times I've needed to ask for pain medication or other interventions, but most often, their journey is a gentle slide into eternity. They aren't my focus. The family are usually the ones who need care at that point. A basket of things they might need, a cup of tea, a meal, a blanket, a hug. My mission is to support them as they walk this journey with their loved one.

I used to think sitting at the bedside of a loved one and watching them die was horrible and gut-wrenching. It can be, but often it isn't. One beautiful family had both laughter and tears as they spent an afternoon with their dying loved one. He wasn't aware they were there, but they told stories of his life and laughed as he left. What a beautiful way to leave.

I also discovered that not being there is worse. I'm supporting a family at the moment who can't be there. They live several provinces away and aren't able to come. I send daily emails and our chaplain phoned them after they visited. Their love strains across the miles, longing to hold her hand one last time, and my job is to find ways to reach out to them each day until she passes.

I'm doing death better, I think because I've realized the emotional tearing can be difficult, but we can all hold hands and help each other as we cross that final road. 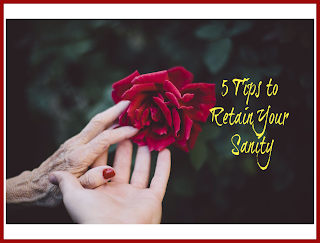 This is an excerpt of an actual conversation. I say "excerpt" because the actual conversation continued for about 45 minutes, and only ended because I left for the day. I have this discussion in various forms every night. The only difference is, showers are only twice a week.

Do you ever have conversations in your head when you're frustrated? Do you want to walk away from the room, throw up your arms in dismay or plug your ears and sing, "La,la,la,la,la." Do you ever think, "Make it stop!"?

The journey of the care partner can be difficult. Topping the list of challenges is conversations that go nowhere, have no resolution and never stop. They require incredible patience and some days, it just can't be found.

How do you handle it when impatient words and sharp retorts are running through your head, threatening to find their way out your mouth? When you can't listen to the same circular debate one more time but you know you have to.

Here are some tips:

1. Do everything you can to get enough sleep. You can't cope with anything when you are overtired. If you are being wakened in the night or having trouble sleeping because you are consumed with worry about a wanderer, you may need to hire help. Even a few good nights' sleep a week can help.

2. Make sure you get breaks. Remember those friends and family members who said, "Let me know if I can help."? Now's the time to give them a call. Have them come for a visit during the times when the litany is the worst, and you leave the building.

3. Try distraction. It doesn't always work, but occasionally the right stimulus will derail the anxiety train. A walk, looking at pictures together, ice cream. I'm not above saying, "Would you like an ice cream sundae?" Hey, desperate measures. Other distractions that sometimes work are looking through familiar photo albums, snuggling with animals and playing with small children.

4. Don't check your sense of humour at the door. Sometimes a sense of humour is the only thing that gets you through. When I start the same conversation for the 12th time, I tend to get the giggles. It's important to remain respectful so you may need to hide in the bathroom until the hilarity passes.

5. Tip #5 is yours. What do you do to maintain sanity during cyclical conversations with someone with dementia and anxiety?  How do you cope? Reply in the comments and share your best wisdom.